A recent study published on the preprint server medRxiv (medRxiv publishes preliminary scientific reports) from researchers at the University of Illinois and Brookhaven National Laboratory discusses the effect of the persistent contact heterogeneity factor on the final epidemic size of COVID-19. The paper says that using estimates based on this measure reduced the herd immunity threshold and suggests that areas affected the worst such as New York City are almost at this threshold, meaning that they will not be sources of spread to other areas if another outbreak occurs.

Epidemiological models are important to studying numbers and progression of any infectious outbreak, but incorporating the role of population heterogeneity in terms of individual susceptibility and social networks into these studies is challenging; among the significant consequences of these factors is the occurrence of superspreader events that can fuel an initial local outbreak, the alteration in the herd immunity threshold, and the final size of the epidemic.

Several approaches have been adopted to include this factor while modelling the dynamics of an epidemic, focusing on various characteristics and parameters such as using age-stratified groups to estimate variation in contacts and susceptibility, or using mathematical modelling to simulate real or artificial social networks. 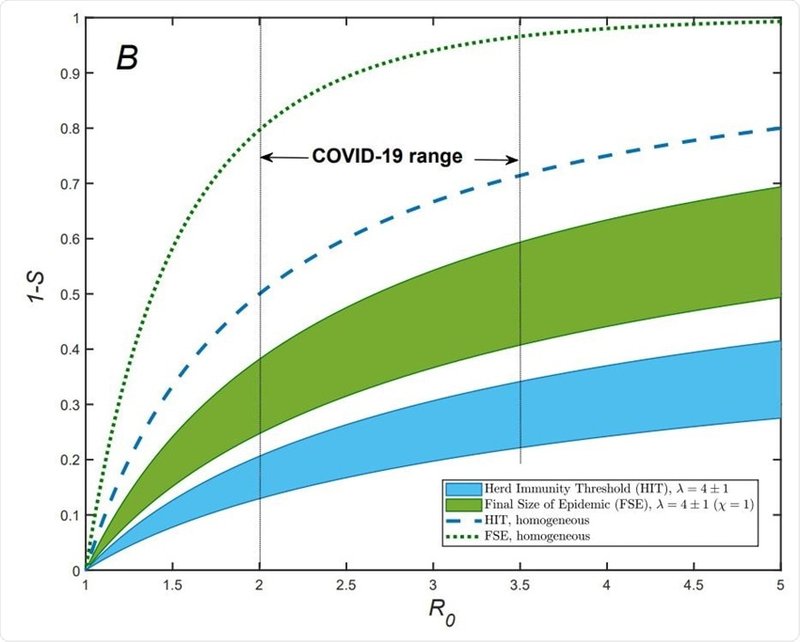 "Re/R vs S dependence for gamma-distributed susceptibility for λ = 4±1 (blue area). The dashed line shows the classical homogeneous result, Re = R0S. Note a substantial reduction of Re for COVID-19 in both NYC and Chicago, compared to that value. Approximate fractions of susceptible populations, S, for both cities are estimated as of the end of May 2020, by using the model described in the paper. B) Herd Immunity threshold (blue area) and final size of epidemic (FSE, green area) for gamma-distributed susceptibilities. The range of λ is the same as in (A). FSE is shown assuming maximum correlation between susceptibility and infectivity (χ = 1), which corresponds to CV 2 α ranging from 1 to 2. Notice a substantial reduction of both HIT and FSE compared to the classical results for homogeneous population which are shown as blue dashed and green dotted lines, respectively."

The current approach is aimed at predicting the whole changing scenario in relation to time rather than predicting the final state of the outbreak as with the other two. This approach has been applied to COVID-19 and resulted in many researchers coming to the conclusion that the herd immunity threshold may actually be significantly lower than that which has been arrived at using more conventional models that are based on homogeneity.

To come to their conclusions researchers considered overdispersion which is a sudden short term burst of viral transmission caused by superspreader events, to be a more significant source of variation. Whereas persistent heterogeneity refers to individual behavioural characteristics pertaining to a long period of time, which is linked to a steadier fluctuation. The researchers attempted to bring together both models by considering the biological and social nature of heterogeneity and their roles in modifying epidemic dynamics through the timespan, as well as how they determine the herd immunity threshold and final size of the epidemic.

The study says, “In our theory, a personal decision to attend a large party or a meeting would only be significant to the epidemic dynamics if it represents a recurring behavioral pattern. On the other hand, superspreading events are shaped by short-time variations in individual infectivity (e.g., a person during the highly infectious phase of the disease attending a large gathering).”

The latter would cause exaggerated estimates of heterogeneity as compared to time-averaged or long term measures that are important in determining how epidemics die out as herd immunity is attained, the researcher comment that this approach is convenient and practically useful in that it does not need more calibration to account for grossly changing epidemic conditions, but it can incorporate real data. This is done by incorporating the immunity factor A which encapsulates the whole effect of heterogeneity in many cases, and this factor decides how fast the effective reproduction rate falls in the early stage of an outbreak and it is instrumental in arriving at the modified herd immunity threshold and final size of the epidemic in the absence of mitigation.

Heterogeneity among individuals in a population comes from biological factors such as immune function, genetic makeup, age, co-existing illnesses, and social factors like the number of close contacts a person has. The susceptibility factor a would not vary only with biological immunity, but it would be higher among those in high-risk occupations, those working in social hubs, and those who systematically defy regulations; those sources fall within the immunity factor A.

After having estimated this the researchers used high-quality empirical data on hospitalizations, ICU occupancy, and the number of daily deaths to estimate the immunity factor A from New York City, Chicago, and from individual states arriving at a marked decrease in Re, indicating the prominent role played by heterogeneity and an immunity factor A between 4 and 5. This closely agrees with the value calculated from social and biological heterogeneity, as such the researchers commented that  “This analysis shows how our model is able to make concrete and testable predictions.”

Then the researchers incorporated their theory into a time of infection epidemiological model to predict the possible outcome should a second wave occur in Chicago and New York City, to come to the projection that there will be no second wave in New York City which means that the herd immunity threshold has already been passed there. Chicago faced a medium intensity outbreak, should there be a second outbreak it is projected to be much milder due to the heterogeneity effects even if no mitigation is undertaken. But if mild measures were implemented such as distancing and wearing a mask when distancing is not possible a second outbreak could be avoided completely in such places.