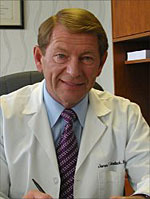 Dr. James F. Lineback is Board Certified in Internal Medicine (1981), Pulmonary Medicine (1992), and Anti-Aging Medicine (2005) and is a Fellow of the American College of Chest Physicians. He is a graduate of Illinois State University (1971), and the University of Illinois Department of Anatomy (M.S., 1974), and College of Medicine (M.D., 1977). He has practiced medicine in Southern California since 1983, primarily treating patients with life-threatening cardiac and pulmonary disorders. Since 1986, Dr. Lineback has been involved in the training of medical students, interns and residents at UCLA, USC and the University of California, Irvine. He currently holds an academic appointment as Associate Clinical Professor of Medicine and his area of expertise is pathophysiology and the mechanisms of disease.

An active participant in athletic events, such as triathlons and marathons for many years, Dr. Lineback has been dedicated to the belief that health and well-being are achieved through lifestyle choices and preventative care. He is further dedicated to promote an understanding of the science and principles of good health and longevity to his medical students, patients, and the public.