YOU ARE NOT TAKING ENOUGH OMEGA-3

“I am glad to share with you what I have learned throughout my personal quest to overcome adversity to become an accomplished neurosurgeon, scientist, Ironman athlete, consultant, author, and advocate on healthy living and nutrition.”  ~ Dr. Joseph Maroon.

After researching and writing two books on fish oil and recommending it for my patients for decades it is still surprising to me why most physicians either don’t recommend it routinely or at a dose that actually may help. The fact is the omega-3 found in fish and fish oil supplements has tremendous benefits for the whole body. It is especially important for joints, skin and is critical for brain health.

Our brain cells are unique in that unlike every other cell line in our body, they have the most EPA and DHA in their cell membranes. Approximately 30% of the “gray matter” that contains most of the neuronal cell bodies in the brain is comprised of DHA . In a study done in 2014, researchers found after doing an MRI at baseline and then 8 years later the women that had higher levels of omega-3 in their blood had maintained a larger normal brain volume compared to those who had lower blood omega-3 levels 8 years later.  Normal aging typically results in overall brain atrophy and they concluded that lower omega-3 consumption may signal an increased risk of brain atrophy. See Study HERE

You are NOT Taking Enough Omega-3

In perhaps one of the most advanced studies ever done to prove the link between brain health and omega-3’s, specifically DHA, researchers from USC recently published a study entitled – Brain delivery of supplemental docosahexaenoic acid (DHA):

A randomized placebo-controlled clinical trial.   This study had it all when looking at brain health and omega-3.

They noted that typical studies that used omega-3 dietary supplements for brain health generally used a very low dose (1 gram or less).  They also knew that many people that are at risk or are suffering from Alzheimer’s disease have a genetic condition that alters the molecule APOE4.  APOE4 is the carrier for omega-3 that helps to incorporate it into the brain cell membrane that we discussed several weeks ago.  (See prior post HERE)

They hypothesized that larger doses of DHA are needed for adequate brain bioavailability and that APOE4 is associated with reduced delivery of DHA and eicosapentaenoic acid (EPA) to the brain before the onset of cognitive impairment (dementia). The set out with older people, who were NOT cognitively impaired, but did have a family history of dementia. They gave half of the subjects a placebo of vitamins and the rest received high dose >2 grams of DHA daily for 6-months.

What did they find?

This is by far the most comprehensive proof that HIGHER doses of omega-3 DO make a difference in brain health.  I would urge everyone, no matter what their age, to consult their healthcare professionals and start on at least 2 or more grams of high-quality omega-3 supplements daily. 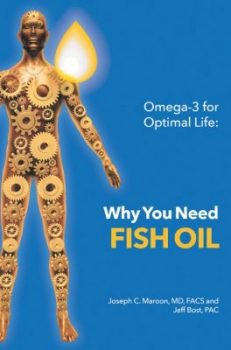 Joseph Maroon, MD, FACS, among his accomplishments he is Senior Vice President of the A4M, board-certified neurosurgeon, best selling author, keynote speaker, sports medicine expert, triathlete, and one of our medical editors. Dr. Maroon is an expert and consultant in the areas of sports nutrition, concussion management, personal fitness, and brain and spinal problems, he has cared for numerous celebrities and high-level athletes, as well as being an internationally competing Ironman triathlete.