What Is Your Healthspan?


“People don’t just want to live longer,” says Frank Hu, chair of the nutrition department at the Harvard T.H. Chan School of Public Health. “They want to live longer without a major chronic disease.” His team has examined what it takes to lengthen not just your lifespan, but your “healthspan.” So how well does your lifestyle stack up?

“Two years ago, we reported that people with five healthy habits—eating a healthy diet, exercising regularly, keeping a healthy weight, not drinking too much alcohol, and not smoking—live more than a decade longer than those with none of those habits,” says Hu.

That being said having to live those extra years while being burdened by illness is far worse than spending the extra decade in good health. However, it is easier to study lifespan than it is to study healthspan.

“So in our new study, we re-ran our analysis to look at life expectancy free of cancer, cardiovascular disease, and type 2 diabetes,” explains Hu. Obviously there are more than these three illnesses that are threats to health and lifespans. “You could argue that a respiratory disease like emphysema or a neurodegenerative disease like Alzheimer’s is also very important for quality of life,” says Hu. “But we don’t have sufficient data to estimate life expectancy with or without those conditions.”

Each habit including smoking, weight, alcohol, diet, and exercise can individually affect your life expectancy at the age of 50. This study tracked roughly 111,500 people for 28 to 34 years and examined the impact of several healthy habits together. This study was adjusted for other factors such as age, ethnicity, taking multivitamins, aspirin, hormones, as well as having a family history of diabetes, heart attack, or cancers. 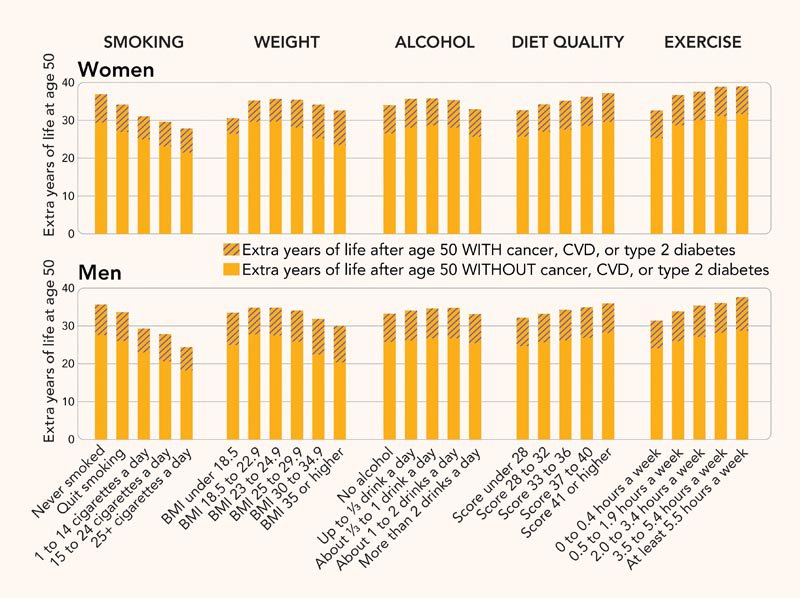 “Smoking is the single most important risk factor for dying of these illnesses,” says Hu, and only those who never smoked were considered as being low risk. Smoking increases the risk of at least a dozen cancers plus heart disease, stroke, diabetes, and causes 80% of the deaths from emphysema and other chronic obstructive pulmonary disease.

Low risk also meant having a healthy weight. “People can be underweight and healthy,” notes Hu. “But chronic smokers tend to be underweight.” And being underweight can be a sign of trouble. “Some underweight people may have undetected cancer or neurodegenerative disease,” says Hu. “For example, we find that people who are diagnosed with Parkinson’s disease began to lose weight several years before the clinical diagnosis. An illness like that may explain the lower life expectancy for some underweight people.”

For alcohol being low risk meant no more than one third to one serving of beer, wine, or liquor per day for women and no more than one third to two serving per day for men. “Alcohol consumption has some potential cardiovascular benefits,” says Hu. “But it’s also harmful.”“The women averaged roughly one drink every other day, and the men averaged about one drink per day. So we’re talking about pretty light to moderate consumption.”“Alcohol is a carcinogen, and it increases the risk of injury and accidental causes of death,” says Hu. “So we don’t want to encourage non-drinkers to start drinking or drinkers to drink more.”

A low risk diet meant having a score on the Alternate Healthy Eating Index within the top 40% of all study participants. You can get a rough idea of how your diet stacks up by clicking here, but keep in mind this is a simplified version.

Low risk exercise meant doing at least a half hour a day of moderate intensity aerobic exercise, but even those who reported just a half hour a week live longer than those who do none, and the more you do the better. “Even a moderate increase in physical activity can be beneficial,” says Hu. “Being sedentary is terrible for your health.”“People in the highest categories—basically one hour of moderate-to-vigorous physical activity per day—live five or six years longer than the most sedentary group,” notes Hu.

“We know that 80 percent of cardiovascular disease and 90 percent of type 2 diabetes are attributable to major lifestyle factors,” says Hu. “Overall, smoking has the strongest effect,” says Hu. Lung cancer is only one of a dozen cancers that it causes. “And obesity is linked to a higher risk of several major cancers,” he adds. “But the effects of diet and physical activity on cancer are more subtle than they are on type 2 diabetes and cardiovascular disease.”

“These lifestyle habits may not only delay the onset of those diseases but also improve the survival of people who already have them,” says Hu.