What You Must Know About Lipoprotein(a)


Article courtesy of Dr. Joel Kahn, MD, who is a Clinical Professor of Medicine at Wayne State University School of Medicine, one of the world's top cardiologists, best-selling author, lecturer, and a leading expert in plant-based nutrition and holistic care.

Trainer Bob Harper had a big following on the TV show The Biggest Loser, where he led obese contestants through a program of eating healthy and working out diligently. Harper appeared very fit which is why the show’s followers were shocked when Harper collapsed at a gym in cardiac arrest in early 2017 at age 51. Fortunately, a cardiologist was in the gym at the time and was able to use the automatic external defibrillator to shock Harper back to life. Harper was then rushed to a New York hospital and had an emergency procedure to place a stent in one of his heart arteries.

How could one of today’s most fit TV personalities suffer a massive heart attack and not have known he was at risk for heart disease? A few months after his heart attack, Harper appeared on the Dr. Oz Show and announced that he had a very high level in his blood of Lipoprotein(a) or Lp(a), but he had only learned about it after his heart attack. Harper’s story was written up in the New York Times and other media to alert others of the risks of the hearts quite killer. 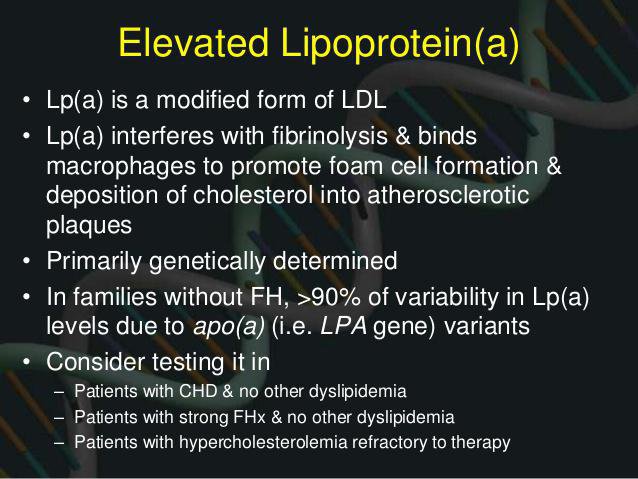 Lp(a) is a complex cholesterol molecule whose presence in the blood is determined by genetics. It is composed of an LDL-cholesterol particle, a sulfur bridge, and another lipid particle called apolipoprotein(a). If Lp(a) is inherited, levels in the blood will reach a plateau at around age two and remain high through adulthood. It is the most common inherited risk for developing premature cardiovascular disease. It is sometimes called the “sticky” cholesterol. There is a range of a thousand-fold difference in the level of Lp(a) in the blood amongst people, which is much greater variance than there is for LDL cholesterol alone.

Lp(a) can cause several types of coronary heart disease, such as heart attack, stroke, peripheral arterial disease, aortic valve disease, and heart failure. The risk of heart disease from elevated Lp(a) will be even higher in the presence of smoking, hypertension, and type 2 diabetes. Elevated Lp(a) can influence the risk of blood vessel and heart valve damage from birth.

Many studies have acknowledged the importance of elevated levels of Lp(a) since its identification by Norwegian researchers in 1963. According to a National Heart, Lung, and Blood Institute report published in 2018, an estimated 1.4 billion people globally have elevated Lp(a) levels, representing about 30 percent of the entire population. Elevated Lp(a) levels have been identified in patients with established arterial disease, calcific aortic valve disease, and chronic kidney disease.

The Potential Dangers of Lp(a)

The Canadian-led INTERHEART study of 2004 found that people with high Lp(a) levels (>50 mg/dL) had a risk of heart attacks that was about 1.5 times greater than for people with lower Lp(a) levels even after factoring in other known risk factors. A study that combined research done from 1970 through 2009 showed that the rates of heart disease in people whose Lp(a) values were in the top third of those measured were 5.6 times higher than those in people with levels in the lowest third. Another analysis published in 2019 indicated that elevated Lp(a) levels were independently associated with an increased risk of overall cardiac events in heart disease patients. The researchers concluded that measurement of the lipoprotein(a) level has the potential to help people with heart disease—and their health-care providers—determine their level of risk.

Another study done in Denmark in 2009 looked at almost 40,000 people who already had registered Lp(a) levels to see who would develop heart disease in the future. People with the highest levels of Lp(a) had nearly three times the risk of heart attacks compared to those with the lowest levels.

The possible role of Lp(a) in the risk of stroke has been studied.  The carotid arteries are the main sources of blood flow to the brain, and damage to these arteries can create plaques and clots that may break off and cause strokes. In 2018, a team of North American researchers examined whether the presence of high Lp(a) levels would correlate with increased risk for stroke. They noted that even though measures were taken to aggressively lower cholesterol levels, higher Lp(a) levels led to more strokes in the individuals they studied. In 2014, a group of German researchers looked at studies done that year of more than 90,000 people, comparing those with high Lp(a) levels to those with low Lp(a) levels. The study concluded that the risk for stroke was 1.4 times higher for people with elevated Lp(a) levels. Younger participants with elevated Lp(a) levels had an even higher stroke risk than older participants.

Severe thickening of the aortic valve leading into the heart (known as calcific aortic valve disease) is less prevalent than heart attack or stroke, but it still affects a large number of people. The risk of dying from a blocked valve is 25 percent at one year after a diagnosis and 50 percent at two years unless action is taken to correct it. Lp(a) can cause progressive calcification and malfunction of the aortic valve. Lp(a) levels in people with this disease are not routinely measured, but studies indicate how important this information would be for both patients and doctors. A recent study in Denmark following almost 78,000 people found that elevated Lp(a) levels were associated with an increasing risk of calcific aortic valve disease that was as much as three times higher than the general population. Gene studies done at McGill University in Montreal also show a relationship between Lp(a) levels and calcific aortic valve disease.

Although measurement of Lp(a) is widely available, it is not yet considered a routine lab test. However, in 2019 the European Society of Cardiology recommended drawing a level of Lp(a) once in a person’s lifetime. Furthermore, a clinical trial of an antibody is underway in over 7,000 patients and the results are anticipated in 2024.

About the author: At his core, Dr. Joel Kahn believes that plant-based nutrition is the most powerful source of preventative medicine on the planet. Having practiced traditional cardiology since 1983, it was only after his own commitment to a plant-based vegan diet that he truly began to delve into the realm of non-traditional diagnostic tools, prevention tactics, and nutrition-based recovery protocols.