Study Suggests That Kidneys Deteriorate With Age Regardless Of Health


A recent study examining the kidney function of groups of people between the ages of 50 -95  published in the Journal of the American Society of Nephrology suggests that human kidney function deteriorates with age regardless of the presence of other diseases.

"What we see is that what happens in our kidneys when we age is representative of all the other things that happen in our bodies. The kidney function deteriorates, not because we get ill, but as part of aging," says Bjørn Odvar Eriksen explains, a professor at the Department of Clinical Medicine at UiT and leader of the Metabolic and Renal Research Group and lead author of the article.

"Loss of kidney function is something that happens to all humans, and is thus a way to determine aging in general. There is still variation as to how quickly this happens, and we still do not have good answers as to why this variation occurs. We have examined many factors that can play a part as to why some of us experience larger loss of kidney function than others," he says.

This study examined kidney function in a group of people aged 50-70 and two other groups of people aged 70-95 years old. One of the groups consisted of more than 1,6000 participants from Norway’s most comprehensive population study, the Tromsø Study, which was conducted over 40 years, and this group has been through study examinations 3 times, with the last iteration of the study still being ongoing at the University Hospital of North Norweat led by Associate Professor Toralf Melsom.

"No other study has done these kinds of examinations on a part of the normal population. That is why this study is so unique," Eriksen says.

Participants were injected with a substance that only separates into the kidneys to measure kidney function, and after several hours the researchers measured how much of the substance reamined in the blood as a measurement of the kidney’s ability to remove toxins and waste products.

"For those who experience loss of kidney function at a high age, this is a considerable burden. That is why this is an area that needs further research to find more answers," Eriksen says. According to Eriksen more people may experience loss of kidney function as it becomes more common to survive diseases such as heart/vascular diseases and cancer.

“Statement: In populations, mean GFR is lower in older age, but whether healthy aging is associated with preserved rather than lower GFR in some individuals is unknown. In a meta-analysis of three large European-based cohorts, the authors investigated the cross-sectional association of being healthy (defined as having no major chronic disease or risk factors for CKD), age, and iohexol clearance measurements. The mean and the 97.5th percentile of the GFR distribution were higher in older persons who were healthy than in those who were unhealthy, but lower than in middle-aged people who were healthy. The GFR-age association was more negative in women than in men. These results suggest that, although being healthy is associated with higher GFR in old age, healthy aging is probably not associated with preserved GFR in old age.

Background: Population mean GFR is lower in older age, but it is unknown whether healthy aging is associated with preserved rather than lower GFR in some individuals.

Methods We investigated the cross-sectional association between measured GFR, age, and health in persons aged 50–97 years in the general population through a meta-analysis of iohexol clearance measurements in three large European population-based cohorts. We defined a healthy person as having no major chronic disease or risk factors for CKD and all others as unhealthy. We used a generalized additive model to study GFR distribution by age according to health status. 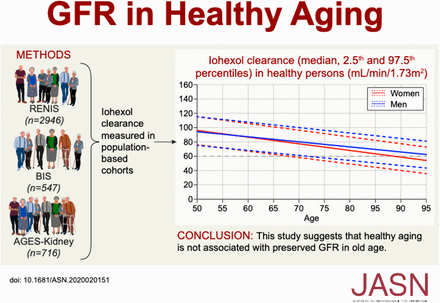