It’s pretty easy to spot differences between the two people on these positron emission tomography (PET) scans. In the scan of the male individual on the left, you see lots of small, dark spots around the neck and shoulders. But you can’t see any on the female on the right. What’s the explanation? Is this a sex difference? No! Brown fat! 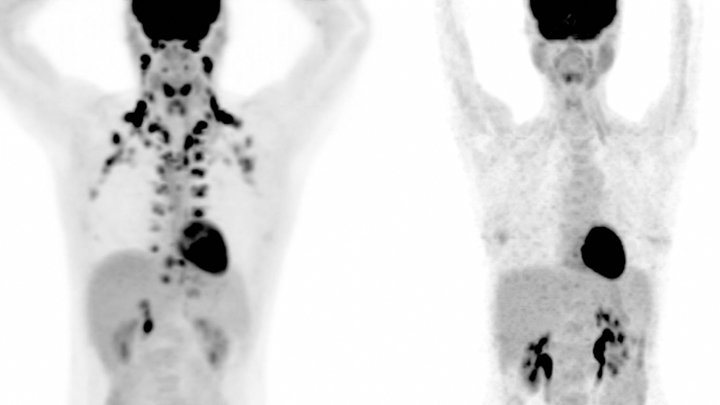 This energy-burning type of fat happens to show up as small, dark spots in the neck and shoulder area on PET scan studies. So, as these scans reveal, the individual on the left possesses an abundance of brown fat, while the person on the right has essentially none. This wide range of difference in abundance is true for both men and women.

Researchers’ interest in brown fat began to heat up (sorry about that!) more than a decade ago when it was discovered that certain adults have persistently high levels of brown fat. It’s long been known that babies have brown fat, but it had been thought this fat generally vanished as children grew up. It turns out that adults who hold onto their brown fat are less likely to be overweight than adults who do not. That’s because brown fat actually burns extra calories, instead of storing it in the way the more familiar white fat does.

But are people with more brown fat actually any healthier? After studying about 130,000 PET scans from more than 52,000 people, researchers led by Paul Cohen, The Rockefeller University Hospital, New York, NY, say that the answer is “yes” in certain key areas. In a recent study in the journal Nature Medicine, they found that people with detectable brown fat had a lower incidence of many cardiovascular and metabolic conditions, including type 2 diabetes, congestive heart failure, and high blood pressure.

Studies to explore the health benefits of brown fat have been challenging to do. That’s because brown fat only shows up on PET scans, which measure how much glucose various tissues consume, an indication of their metabolic activity. What’s more, PET scans are quite costly and involve radiation exposure. So, researchers have been reluctant to ask healthy people to undergo a PET scan just to look at brown fat. But a solution occurred to the study’s first author Tobias Becher, who was aware that thousands of patients at nearby Memorial Sloan Kettering Cancer Center were undergoing PET scans each year as part of routine evaluation and care. In fact, cancer doctors often make note of brown fat on PET scans, if only to make sure it’s not mistaken for cancer.

So, the Cohen lab teamed up with Memorial Sloan Kettering Cancer Center radiologists Heiko Schöder and Andreas G. Wibmer to review many thousands of PET scans for the presence of brown fat. And they found it in about one of 10 people.

Next, they looked for health differences between the 10 percent of people with brown fat and the 90 percent who lack it. The differences turned out be striking. Type 2 diabetes was about half as prevalent in folks with detectable brown fat compared to those without. Individuals with brown fat also were less likely to have high cholesterol, high blood pressure, congestive heart failure, and coronary artery disease.

The findings suggest that brown fat may even help to offset the negative health effects of obesity. The researchers found that obese people with brown fat had a health profile that otherwise appeared more similar to individuals who weren’t obese. In fact, the benefits of brown fat were more pronounced in individuals who were overweight or obese than they were in people of normal weight.

Still, the researchers note that people with cancer might tend to show differences in brown fat compared to healthy adults. There’s some evidence also that prevalence may vary across cancer types and stages. The researchers took those variables into account in their studies. It’s also known that women are more likely to have brown fat than men and that the amount of brown fat tends to decline with age. What’s not yet well understood is whether differences in brown fat exist among people of different racial and ethnic backgrounds, and whether specific genetic factors are involved.

So, plenty of questions remain! Researchers not only want to figure out why some adults have so much more brown fat than others, they want to explore whether brown fat produces hormones that may add to its calorie-burning benefits. The hope is that these and other discoveries could eventually lead to new strategies for treating obesity, diabetes, and other metabolic conditions.

This article was written by Dr. Francis Collins, who is a physician-geneticist noted for his landmark discoveries of disease genes and his leadership of the international Human Genome Project, which culminated in April 2003 with the completion of a finished sequence of the human DNA instruction book. He is director of the National Institutes of Health in Bethesda, Maryland, United States.