How to Choose the Right Dose of Exercise for Your Brain


You know that feeling of clarity you get after a good run or ride? The feeling that your synapses are firing, your mind is a laser, and if someone flashed a series of random cues on a computer screen you’d be able to hit the right button in a fraction of a second? No? Well, trust me. There’s a bunch of evidence that short bouts of moderate exercise improve performance in cognitive tasks immediately afterward. It’s not necessarily the kind of thing you can feel, but it’s a highly repeatable finding.

But there are also a lot of unanswered questions about this phenomenon, as a recent study in the Journal of Sports Sciences makes clear. How much exercise is enough to trigger this effect? How much is too much? Does it matter how fit you are? Or what type of cognitive task you’re doing? A group of researchers at the University of Sydney and Griffith University in Australia, led by Danielle McCartney, tries to fill in some of these gaps.

The first cognitive test assessed reaction time: four black boxes appeared on a screen, and whenever one of them turned red, the subject had to press a button corresponding to that box as quickly as possible. The second cognitive test, known as the Stroop test, assessed more complex elements of executive function, like the ability to override your instinctive response. It involved a series of words (red, green, blue, black) appearing in random colors (red, green, blue, black). The subjects had to press a button corresponding to the color of the letters, not the meaning of the word. Sometimes the color matched the word; sometimes it didn’t. (Believe me, it’s trickier than it sounds!)

A study back in 2015 from researchers in Taiwan found that 20 minutes of moderate exercise produced the biggest cognitive boost, whereas 45 minutes wasn’t as good. There were a bunch of differences between that study and the new Australian one, but the most important is that the earlier study used healthy but non-athletic university students. For that population, 45 minutes of exercise might be quite unusual and exhausting, which could hurt cognitive performance. The new study used trained endurance athletes, who might be better able to benefit from a longer exercise bout.

Sure enough, 45 minutes of exercise produced better cognitive performance than 15 minutes. Here’s what the results looked like. Each bar shows an “effect size,” representing how the subjects performed on their cognitive tests compared to their baseline pre-exercise values (higher is better in all cases): 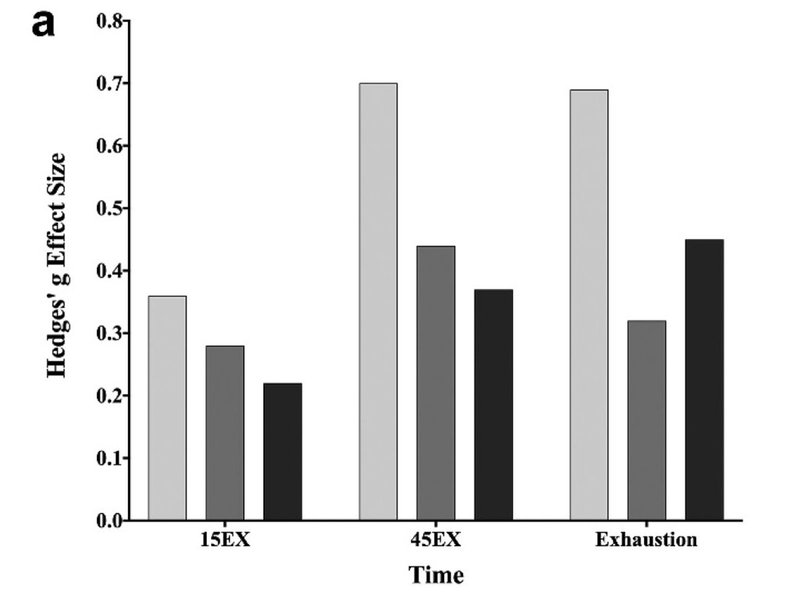 The first point to note is that, in all cases, 45 minutes was better than 15 minutes (though the difference for the dark gray bars wasn’t statistically significant). There’s presumably a point for everyone where, if you exercise for long enough, your cognitive performance will start to drop. For these trained endurance athletes, it didn’t happen at 45 minutes, even for the more complex parts of the test.

And contrary to what the researchers expected, it didn’t happen after complete exhaustion either. Some previous studies have suggested that all-out exercise hurts cognitive performance, perhaps because your system is flooded with stress hormones that shut down higher processing. But other studies have produced contrary results, and this one also doesn’t support that idea. It’s worth noting that there was a delay of about two minutes from the moment of exhaustion until the start of the cognitive tests, so that delay could have been just enough to ease out of that fight-or-flight mode.

One other detail is that the subjects weren’t allowed to consume any fluids during the trial. The male participants lost an average of 2.3 percent of their starting weight, and the female participants lost 1.7 percent—well above the threshold sometimes suggested to cause cognitive impairment. Given that cognitive performance improved after all stages of the exercise protocol, it seems unlikely that this is a serious concern.

Another nuance: the subjects all repeated the entire protocol twice. During one of the tests, after the 15-minute mark, they were given two capsules and told they were “designed to enhance cognitive (mental) function” during exercise. They were just placebos, but the researchers wanted to test whether better or worse performance on the tests was influenced by whether the subjects believed exercise would hurt or help their brainpower. The placebos didn’t end up having any significant effect, which bolsters the case that this is a physiological effect—a result of, say, enhanced blood flow to the brain or elevated levels of neurotransmitters.

Of course, a brief boost in brain function is nice, but we can’t always pop out for a jog before every important decision or meeting, or deadline throughout the day. For practical purposes, the more powerful set of findings are those that deal with long-term gains in cognitive function (or at least gentler declines for those of us past puberty). For that purpose, too, we can have endless debates about the right dose and best kind of exercise—but the detail that sticks with me, from a 2015 University of Kansas study, is that the best predictor of cognitive gains over an extended period of time is VO2 max gains. In other words, whether you’re a new exerciser or a veteran athlete, do whatever is required to get your body fitter, and the brain will follow.

This article was written by Alex Hutchinson at Outside Online.